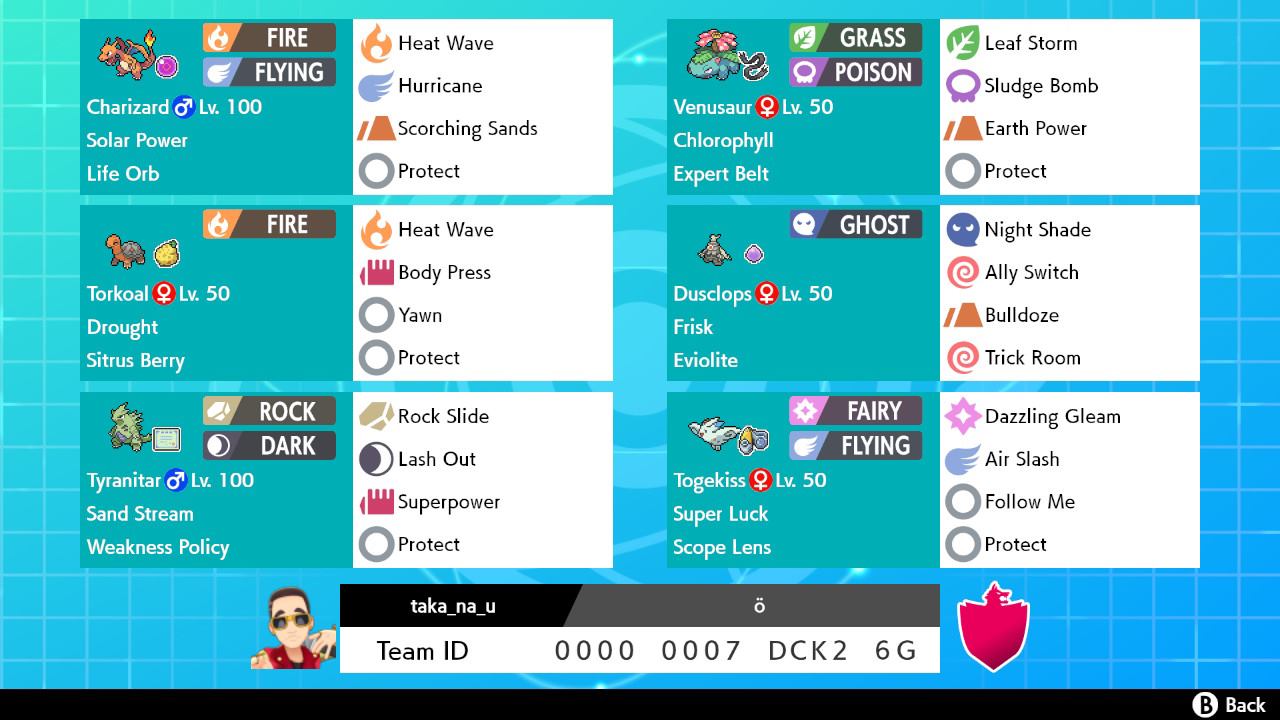 I recorded 5-2 in swiss round, and won in top cut.

Charizard is an attack core in this team. I regarded Max Airstream as important as G-Max Wildfire. Providing speed boost to Tyranitar and Togekiss, it enables to go for dominance by speed.

Heat Wave is useful to attack without Dynamax, especially against Follow Me + Trick Room setups such as Indeedee + Hatterene. I think Protect is essential to Charizard. Hurricane provides 140 BP to Max Airstream. Scorching Sands was added to destroy Coalossal but it could be replaced with Blast Burn.

I think Charizard is more stable in BO3 format than BO1 format, because it’s weakness is an unexpected trap, such as Max Rockfall, Choice Scarf, and Thunder Wave.

Torkoal is a defense core in this team. I picked bulky spreads, because I regarded that Yawn and Body Press were more helpful than Eruption. Yawn is especially effective to Dynamax Cinderace and Dragapult. It also provides a way to stall opponent’s Trick Room turns. Body Press is super effective to Incineroar and Tyranitar etc. It can’t be weakened by Intimidate, Snarl, and Parting Shot.

I didn’t choose Burning Jealousy and chose Heat Wave instead. Because Burning Jealousy depends on opponent’s selection, Yawn is more stable as a counter to Dynamax in my opinion. Actually I experienced many times Cinderace’s G-Max Fireball and Excadrill’s Max Rockfall against my Torkoal, just in case its Burning Jealousy. I think Burning Jealousy against Dynamax hoping to burn it is very similar to Roar against Xerneas expecting its Geomancy in VGC2019, and I don’t like them.

EV spreads is borrowed from James Baek’s one. 3 Speed IVs allows it not only to avoid speed tie but also to use Yawn before Gigalith in TR.

Venusaur is a counter to Terrakion and Waters. It earned G-Max Vine Lash in Series 5 and got more aggressive.

Expert Belt fits its move coverage. Protect is necessary to save it as much as possible, because Venusaur is very important to deal with Waters in this team.

Tyranitar is most trustworthy as a counter to opponent’s Charizard. It is also important to have a resistance to Expanding Force, a major threat to Charizard/Venusaur/Torkoal core. Sand Stream helps to deal with opponent’s Venusaur by Charizard while Tyranitar switching in.

I think Weakness Policy is a best item for Tyranitar, maximizing its potential.

It is often boosted by Max Airstream and going for Rock Slide. 252 Spe EVs allows it to outspeed opponent’s Charizard after boosting its speed by Max Airstream. On the other hand, it’s speed sometimes works in Trick Room as well.

I gave Scope Lens to Togekiss, because I used Togekiss as an attacker rather than a supporter. Dazzling Gleam is very effective to Dracovish, Grimmsnarl etc. Unlike Indeedee or Clefairy, it has a very wide attack coverage along with Charizard. I used Follow Me only in some certain situations.

EV spreads is borrowed from Alcana’s one. It was a super good spread.

I added Dusclops as a TR setter. I don’t so often use Trick Room, but my team needs Trick Room especially as a counter against Tailwind. Bulldoze activates Tyranitar’s Weakness Policy.

It can be replaced to Bronzong, mainly for more resistance to Expanding Force and Rock type moves.

Back: Choose from the rest.

A lead for using Yawn against Cinderace.

Terrakion is a major threat for Charizard, so Venusaur is better for this matchup. Togekiss or Tyranitar should be brought for dealing with Dragapult.

Max Airstream often can’t handle Tailwind, so Dusclops should be brought for Trick Room as a counter against Tailwind.

I’m very happy to win a medium scale tournament. BO3 format is more fun than BO1 format for me. I’ll try hard aiming for worlds invite in next year.

Thank you for your reading. 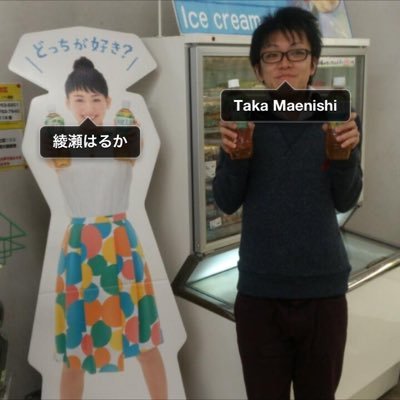