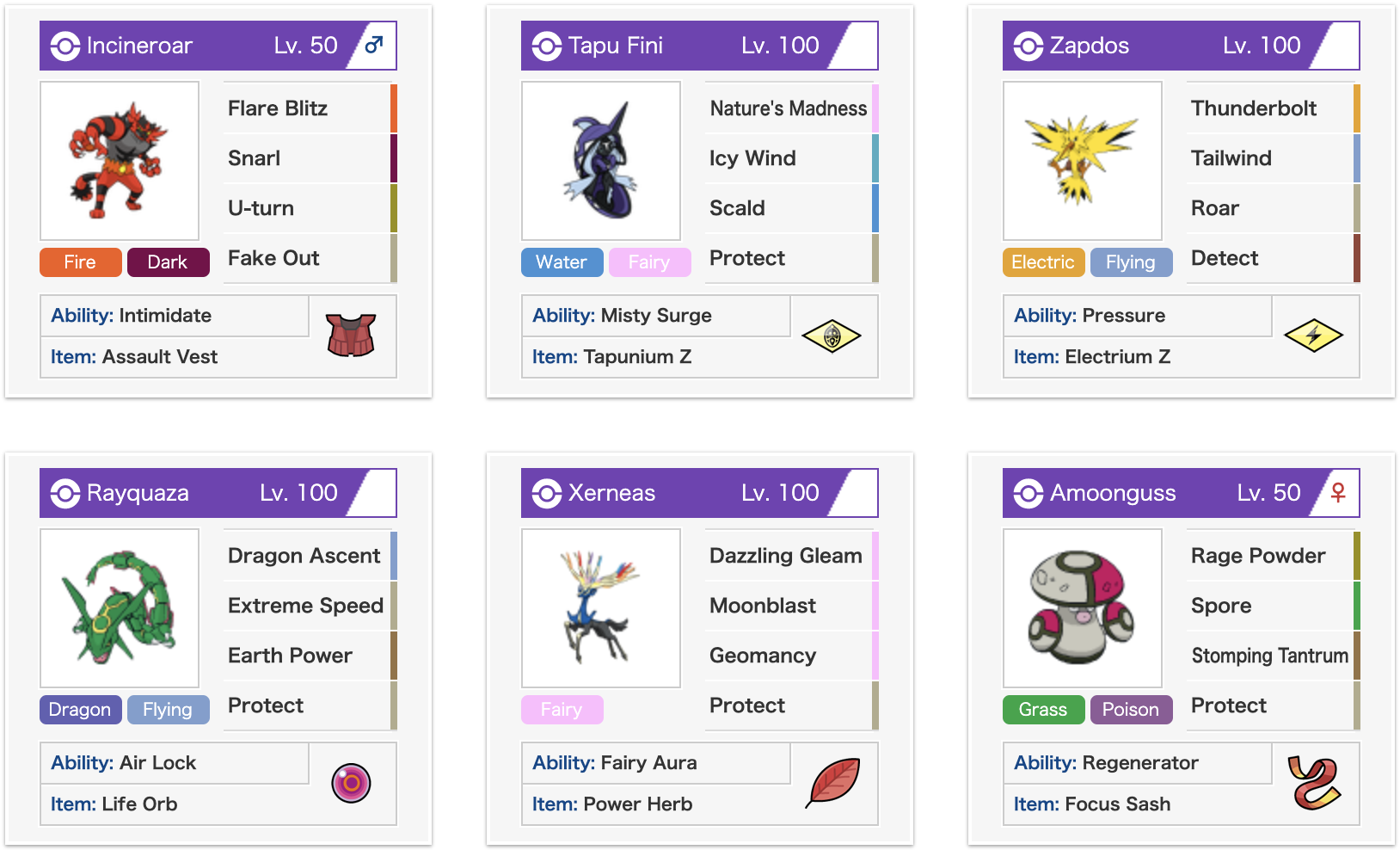 I’ve been using teams including

since the early season in Ultra Series. After Japan Nats, I reconsidered them and found the following needed in the rest two slots:

I considered “Tapu Koko + Suicune” and “Tapu Fini + Zapdos” as a good choice to meet their requirements.

The former is the same six as the famous team, MisterGX’s Spring Scramble 1st Place Team. I tested his team but I was still suffering from Gengar-Mega and Nihilego very much. Suicune can weaken their SpA by Snarl but cannot beat them quickly. Moreover, Suicune can’t use helpful move such as Nature’s Madness and I felt Suicune doesn’t work well sometimes.

Next I tested the latter. Zapdos is an excellent counter against Gengar-Mega, thanks to Tailwind and Roar even if it learns Perish Song. On the other hand, Zapdos can’t do anything against Nihilego so I tried to deal with Nihilego by any means. After many tests, I noticed the combination of Amoonguss and Rayquaza-Mega can be an answer against Nihilego, mainly because Nihilego doesn’t learn Taunt unlike Gengar-Mega. However, Nihilego with Substitute and a terrible pair of Nihilego + Amoonguss are still problems.

I found the Ground-type move is not satisfied only by Rayquaza’s Earth Power. I attempted Incineroar or Amoonguss with Ground-type move. I tested Incineroar with Bulldoze first. It was pretty good but it was a bit difficult to use skillfully. So I tried to use Amoonguss with Hidden Power Ground, following the fact in VGC2015 against Heatran. At that time, luckily I found Amoonguss learned Stomping Tantrum in Gen7 and it can OHKO Nihilego by only 20 Attack EVs. I was very excited by the fact and tested it. It brought so much benefit to my team and I realized it’s perfect for me.

I was using Foul Play for a long time in order to satisfy 1 and 3. But sadly I found it can’t break Gengar-Mega’s substitute after my own Intimidate. Grass Knot was also tempting because Stakataka with Substitute was increasing after Japan Nats.

Stomping Tantrum not only meets all the requirements but make it possible to beat down troublesome Poison or Steel types such as Nihilego and Togedemaru. The problems, it’s hard to deal with Poison or Steel types with Substitute or Rage Powder, are successfully resolved thanks to this surprising move.

I chose Hasty Nature in order to OHKO as many Gengar-Mega as possible and beat down Metagross-Mega by Earth Power plus Stomping Tantrum.

Zapdos is very effective to RayOrge-Celesteela teams. Roar is useful for blocking opponent’s Trick Room and dealing with Gengar-Mega.

I chose Fini as a strong counter against Groudon and Tapu Lele. Tapunium Z is very compatible to Rayquaza’s Extreme Speed. Protect is essential because it’s speed is quite low and it doesn’t have berries.

Amoonguss with Stomping Tantrum is completely new type. If you like, please try it 🙂

Thank you for reading this article.